Malcolm writes, “The date is 7 February 1970 and the match was against Aldershot. In the centre circle the visitors’ player-manager and captain Jimmy Melia can just be made out tossing up with City’s captain Jim Grummett. An action photograph taken at that same match later appeared on the cover of the magazine Football League Review which used to be included in the programme around the late 1960s. Also attached. This shows Melia on the left along with City’s Dave Smith.” 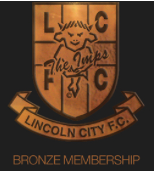